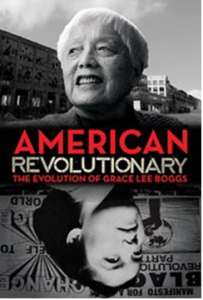 The concept of memes resonates with the philosophy of Grace Lee Boggs, an activist philosopher from Detroit Michigan. Ms. Boggs was of the belief that once you have reached a goal, you have stagnated. Her idea was that movements, activism, growth, creativity, art, is in constant movement. It is always in development. The movement grows, evolves and changes.

Jared Anderson, in his January 25, 2017 JFKU blog post Spiral Dynamics Theory and the 2016 Presidential Election states, “After the green postmodern stage is integral consciousness. This new stage has an extremely important feature which is that it is not just a meme jump, but a tier jump. This jump is moving from an ethnocentric identification into a world-centric identification.” This is an interesting statement from an historical perspective. Consider Ms. Boggs as an example. In the documentary of her life, American Revolutionary: The Evolution of Grace Lee Boggs, she is asked why she has experienced neither psychological cognitive dissonance nor conflict with being a woman and a Chinese American in a predominately African American community doing civil rights work. The persistent asking of this question by the documentarian Grace Lee perplexed Ms. Boggs. After some reflection, Ms. Boggs noted that her formative years in the movement preceded the women’s rights movement and the Asian American rights movement. Thus, her perspective was not segmented nor informed in this way. This reflects the early civil rights movement when the movement itself was universal, seeking freedom for all oppressed peoples in the world, with a focus on the trials and struggles of African-Americans. And so it seems Mr. Anderson is suggesting that we are now in a meme that is reflective of the early days of the civil rights movement. A time when the emphasis and focus was on global liberation of people everywhere, with attention, in America, on advancing liberation through securing civil rights for African-Americans, and by extension, all Americans.

That said, Oppositional Cultural Practice is a return this homoversal and universal values focus, along with an emphasis on humility. Mr. Anderson writes, “World-centric thinking is the world of, “I am right, but partial, and so are you.” This is indeed a welcomed consciousness evolutionary step, yet one that is not new. As it is written in Ecclesiastes, there is nothing new under the sun. Perhaps the time is now ripe for world-centric thinking to bear fruit once again (recalling the civil rights gains of the 1930’s and 1960’s.) The challenge, as I see it, will be to expand this renewed focus on world-centric thinking and humility (a willingness to hold the thought that one could be wrong and that an adjustment to one’s thinking may, and probably will, need to occur.) In Oppositional Cultural Practice“, historical critique and criticism coincide with spirituality to transform both self and society.

The JFKU online courses I have developed, and that are available for everyone’s edification, speak to these ideas through Oppositional Cultural Practice. Although the courses provide continuing education units for lawyers, the content is designed to be accessible and practical for all people who desire to experience personal and social transformation. Through these courses, one can gain new understanding into world-centric consciousness and its connection to the world’s wisdom traditions.

Legal Practice and Feeling Go(o)d: #4 Practice, Praxis and Connecting with Feelings of Well-Being

The journey of transformation can be emotionally charged for some individuals, as it requires critique and criticism of deeply held beliefs, often up-ending reality as we once knew it. The courage to change one’s reality can be grasped. At the February 2, 2017 screening of the film Soul of Justice: Thelton Henderson’s American Journey, at Berkeley Law, Judge Henderson, when asked where he found his source of courage, said

“Through seeing bravery, I became bolder and bolder. You learn courage by seeing courage.”

My strategy for the next four years is to resist; to organize and build alliances based on universal values; and to imagine, create, and realize new institutions, systems, and structures that bend the arch of the moral universe towards justice. Interested in joining me on this journey? Go to the online course catalog and sign up. I look forward to engaging with you there.

Written by Kim E. Clark, J.D. Adjunct Professor and certified Spiritual and Social Transformation changemaker. View her work at SSRN Author ID: 2430405. Contact her at the Educating Gossip or Twitter.