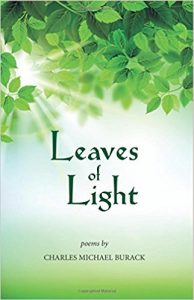 Famed artisan Leonardo Da Vinci once wrote, “Painting is poetry which is seen and not heard, and poetry is a painting which is heard but not seen.” Charles Burack is a master painter, and recent release Leaves of Light his latest masterpiece. Drawing wisdom from nature, the poems ebb and flow like the waves that inspire them; and, like nature, are protean and varied. In Charles’ world, the woods are given voice and the sea a song; cats are even consulted for advice on job hunting.

When he isn’t busy spinning words into beautiful tapestries, Dr. Burack finds time to teach interdisciplinary courses in psychology, literature, creativity, and spirituality at John F. Kennedy University as a full time professor. He’s also served as the Program Director, Chair of the Department of Liberal Arts, and the chief architect of the B.A. Liberal Studies Program. Prior to working at JFK, he taught at numerous institutions including UC Berkeley and St. Mary’s College, and published two other books as well as a litany of additional articles, stories, poems and meditations.

“Charles Burack’s poems pulse with divine mystery and kaleidoscopic consciousness. His passionate verses spring from a soul in communion with a mystic, sacred cosmos. From the ecstasy of love to the elements of the living world, Burack’s vision burns and shines like sparks rising up to the stars.”

-Drew Dellinger, author of Love Letter to the Milky Way