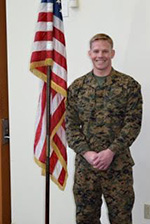 Today we were honored to host the promotion ceremony of Marine Robert Withers to gunnery sergeant. Robert is a leader in our Legal Studies community who has tackled each challenge with poise, professionalism, and humility.

He has served as a TA in Torts, Legal Technology, and Litigation. Robert is set to graduate with a BA in Legal Studies at the top of his class at the end of the Winter 2016 quarter.

During the ceremony, Jared Anderson (veteran academic advisor) and fellow Legal Studies student, Robin Whitley (president of the Student Veterans of America (SVA)), presented Robert with a plaque from the SVA. 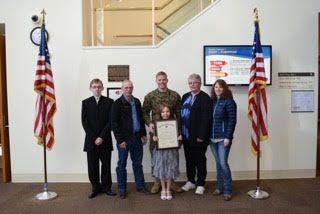 Robert’s family joined us for the ceremony, making the drive down from Klamath Falls, Oregon.

Many others from our Legal Studies and JFK University communities attended in support of Robert.

We are all so proud of him and look forward to??hearing about his continued success!